It was a beautiful 8th day of August in the year 1917. The George A. Marsh cleared American waters for the trip across the expanses of Lake Ontario. She was on her way to the picturesque city of Kingston with a load of much needed coal for the Rockwood Hospital. The Sowards Coal Company had retained her when their usual carrier was found to be unavailable. The Marsh, very seldom, made this trip to the Limestone city, but cargoes were in short supply and her Captain jumped at the chance to earn extra money. Therefore, after, a reported, 450 tons of black energy was loaded into her holds at the port of Oswego New York. She had set sail this lovely morning for Kingston and history. 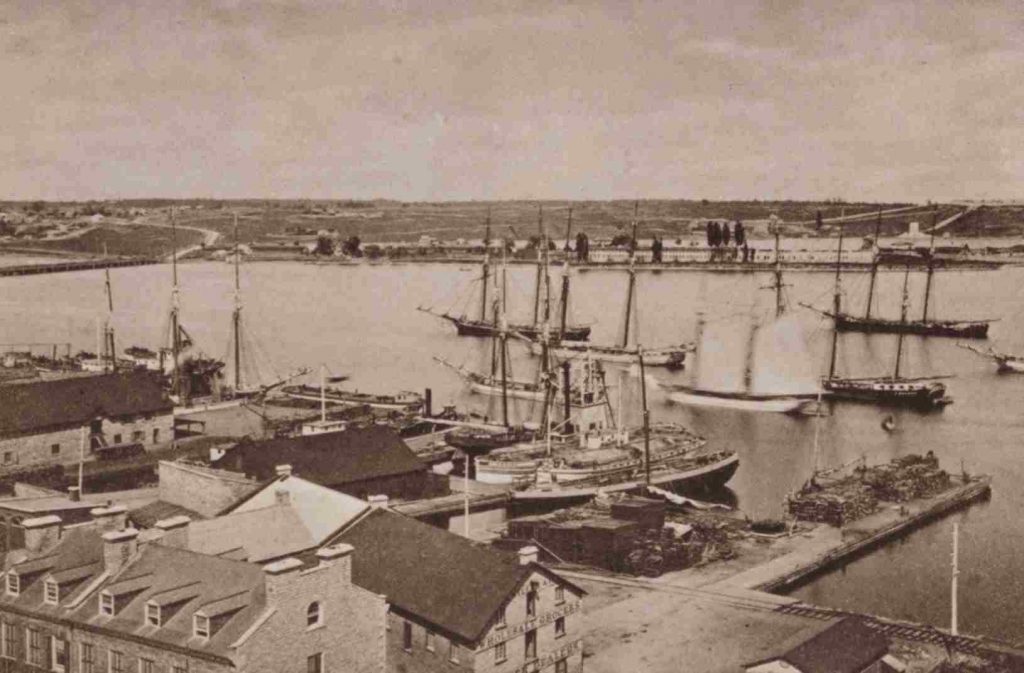 The Marsh and most of the old wooden sailing schooners and barges like her were in their final years of long and gallant careers. Steam had arrived on the scene and with it came larger, faster, and more reliable ships. Ships that were much more economical to operate and maintain by their owners. Steamers carried the better paying payloads of passengers and freight. The old ladies of the lakes were left to carry whatever they could to make a buck. This generally meant over loading the ship’s holds with merchandise such as coal and feldspar. Built twenty-five years earlier the Marsh suffered a little each time such a load was placed against her old timbers.

The George Marsh had started her life in a Muskegon Michigan ship yard in the year 1892. Built for a gentleman by the name of J. Footlander and put to work as soon as she hit the water. For most of the ship’s working career she was to fly an American flag of registry. Then on April 17 1914 a Canadian, Mr. J.B. Flint, of Belleville Ontario, bought her. He went to Toronto, registered the vessel as Canadian, and was given the registration numbers 133750. Her registered tonnage was listed as 220. As with many old ships of that time her new captain John Wesley Smith was a partner and part owner. The schooner was then sailed to her new home in Belleville. Many trips were made across the expanse of Lake Ontario while the ship was based in this small south eastern town. Calling on American ports such
as Oswego New York.

For the thirteen souls on board and making the trip to Kingston this day, things couldn’t have looked brighter. The day was sunny with a nice fresh breeze out of the south west. The ships three large masts could carry plenty of sail, so the trip was going to be fast and enjoyable. Captain Smith was not aboard that day, his sixty five year old mate William Watkins was a seasoned sailor. The second wife of the captain and five of their seven children were on board. As well Mr. Neil MacLellan, a deck hand, had received permission to bring his wife, their eighteen month old baby, and a nephew along. The captain’s brother, William Smith, was also on board. Rounding out the crew was a deck hand by the name of George Cousins. In all 13 people were on board that fateful day.

Then it happened! The ship was suddenly hit with a violent, fast rising lake storm. The kind of storm all seamen of the day feared and had a healthy respect for. The crew of the George Marsh fought this raging enemy of wind and rain professionally and valiantly. Hour after hour the storm battered the old ship while the mariners struggled to keep her from broaching in the mountainous seas. Finally, the old lady’s timbers could take no more. Her seams opened allowing lake water to rush in and fill her passages. The pumps could not handle the vast amounts of water. Her buoyancy gone the George A. Marsh slipped below the surface of an angry Lake Ontario. Ending her career within sight of her Kingston destination and the safety of it’s harbour.

The last few hours in the life of the marsh must have been terror for her crew and passengers. The wind raged, the ship rocked violently from side to side and up and down. Foaming lake water surged again and again over the decks. All of this coupled with the darkness of the night that had fallen over them made it difficult to complete any task. Then the realization that the ship was doomed! The hands managed to launch the yawl that hung on the stern davits. The other life boat remained lashed to the port side deck near the bow. As the ship sank, some people were thrown into the cold black waters. The captain’s brother and deck hand Neil MacLellan managed to climb into the yawl which they would have immediately cut loose from the sinking ship. McLennan had his baby in his arms. One of the other children managed to grab hold of the yawl’s side. For some reason however the two men inside were not able to pull her into their small craft. The cold eventually took its toll. She could hold on no more and was lost to the fury of the lake. After many hours the yawl made it to Amherst Island. By that time, however the McLennan baby had succumbed to the dreadful cold. In all eleven of the thirteen people on board lost their lives. Gone were the captains wife, his children (Greta, John, Harry, Clarence, and one other), Mrs. MacLellan, Her baby, McLennan’s nephew and the deck hand George Cousins. Some of the dead were recovered from the lake. We do know that some of the Marsh’s last seafarers still lay beside their ship at the bottom of Lake Ontario today.

The next morning in that year of 1917. All that could be seen of the once proud ship were her masts sticking above the surface. The George A. Marsh had sunk upright in eighty feet of water. At the time of her sinking she was valued at $5500.00. It was decided not to raise or salvage the ship as it would be too expensive. The masts, being ae enavigational hazard, were pulled out of the deck and dropped alongside the ship. There she sat forgotten and alone for almost fifty years.

On  April 20  2006, Divercity recieved this letter: Thank you Eileen Wessell

I was looking up some info on sunken schooners on the Great Lakes and came across your web site.
The schooner the “George A. Marsh” is of interest to me, as my late husband was related to a Neil MacLellan who survived the wreck. The problem is you have him listed as Neil McLennan. My husband was named after the Captain of this ship John Wesley Smith. John Smith was not on board at the time of the wreck, even though he should have been.
He went to live in the U.S.A. to avoid having trouble with the authorities and died in Oklahoma (Harrah)  quite a number of years later. Even his kin thought he perished on board until they found out different at the time of his death.
Just thought you might like to know.

For the diver to-day the sites to see are her wheel, impressive bow, anchor winch, the cargo, tools, dead eyes, plus many other areas of interest… The wreck is fully intact and gives a good indication of how ships of the late 1800’s and early 1900’s were constructed. P.O.W. marks the wreck with a mooring.