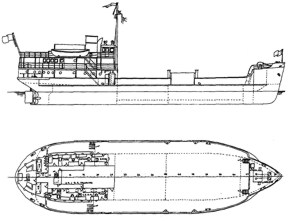 A Collingwood Ship yard built The Ottawa Maybrook and a sister ship during the last days of World War II, they were originally designed as 206 ton, 164ft, class C Coastal Freighters.

Built to be delivered to China as part of an aid package by the Canadian Government. The war ended, China fell to the Communists, the aid was cancelled and the two ships were never delivered.

It was decided to convert the Ottawa Maybrook to a car ferry for use in the Kingston to Wolfe Island run. The Shipyard had to do extensive modifications to convert the freighter to a side loading ferry, but the Maybrook, renamed The Wolfe Islander II, was delivered to Kingston where she replaced the older sidepaddle wheel ferry Wolfe Islander. From 1945 to the late 1970’s this converted coaster traveled back and forth between Kingston, Garden Island, and Wolfe Island. During the summer she would load at the foot of Brock street in Kingston and cross to Marysville on Wolfe island, then back again. Once the Ice of winter closed the Marysville dock the ferry would make the longer trip down the river to her winter dock on the island. As the ice strengthened a tug was employed to keep a path open and would even tow the Islander back and forth on her rounds. Eventually it would become impossible to get through so the ferry and her consort would be tied up for the winter. The Islanders would have to fend for themselves. 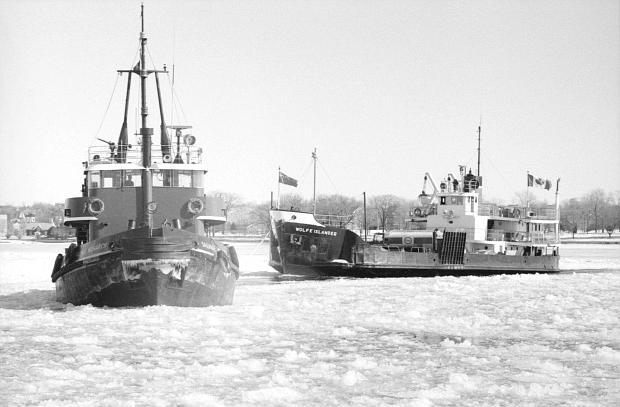 In 1976 a new end loading ferry was delivered, the Wolfe Islander III, to take over the route. Larger, more powerful and more maneuverable, with four multi-directional diesel power units, it traveled in a channel created in the ice following apth made by  a brand new bubble system run by 5 huge compressors on the mainland.The new ship was able to provide year round service.

The Wolfe Islander II was kept around for a time as back up, in case the new ferry broke down, but the modern unit was reliable. The old ship found herself the property of the Marine Museum of the Great Lakes on the Kingston waterfront. Her luck ran out again when the Museum was able to secure the acquisition of the Coast Guard light ice breaker Alexander Henry which is now permanently moored by the dry dock at the museum. It looked for a time like the Wolfe would go the way of the scrap yards. 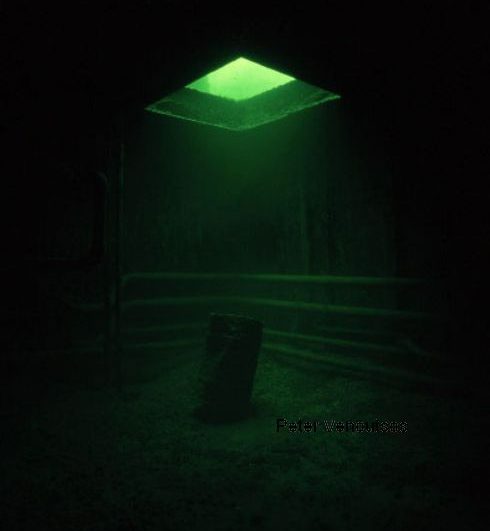 That is until a group of concerned Marine enthusiasts and divers formed a company and took the ship over with the express purpose of sinking her as a dive site in an area protected from the prevailing south west wind. The idea was to provide a safe and interesting dive site accessible in all kinds of weather. At the same time saving the ship from the wreckers torches.

The ship was cleaned and made safe for divers. Sponsors were found and provided the much needed money for the project. Each large sponsor had the name of their company engraved on the glass of the port holes.On September 21st 1985 the old ship set out for the last time out of Kingston’s harbour, this time under tow, almost the same route the route taken to the winter dock for so many years. There in the St. Lawrence River, within sight of the winter dock the Wolfe Islander II was finally put to rest. A fitting retirement for a Kingston landmark, she landed upright in 80 ft of water with the bow facing north. 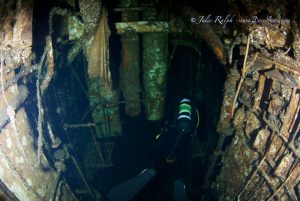 The life boat davits on the rear deck are at about the 40 ft level and the car deck is approximately the 60 ft level. The Salon is backlit by the ports and doors providing lots of ambient light. An air pocket develops in a corner of the cabin from divers air in the summer and it is possible to put your head in to it and speak toyour buddy 60 ft below the surface!!! WARNING don’t breath the air trapped there however as the oxygen is depleted. The hold of the ferry can be accessed as well, but this should only be done by divers skilled in wreck penetration. The insides get very stirred up in a matter of seconds with silt. One of the anchors has been recovered and placed on the deck and a motorcycle appeared on the car deck one day. There is a time capsule on the car deck area and Divers can drop down the stern to view the large prop and rudder at 80 ft.

Many divers return  again and again because you can’t cover the entire wreck in one dive. At one time divers could see the portholes that were engraved by the sponsors of the sinking until a group came with their air tools and took them for themselves. They were caught in the act  by the Divercity Captain who called the authorities, but the culprits ditched the loot overboard before being apprehended.